CEO Of The Month Impacting Business 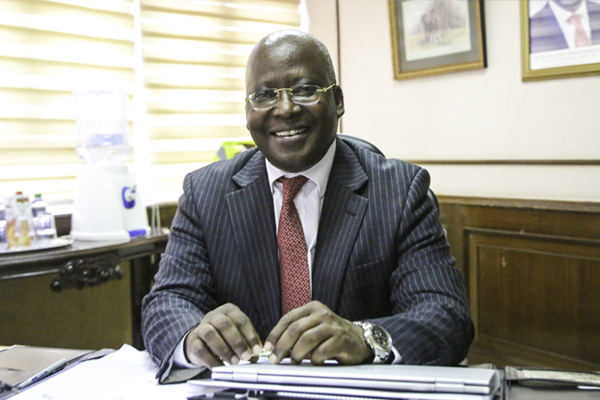 Before his elevation to the position of Acting Managing Director of KAA, Alex Gitari was KAA’s General Manager for Finance.

The Board of Kenya Airports Authority (KAA) announced that Alex Gitari had been appointed as the authority Managing Director and Chief Executive Officer effective July 8, 2021.

Alex Gitari emerged as the best candidate after a rigorous interview process which was conducted as per the KAA Act and Public Service Commission guidelines.

Before his elevation to the position of Acting Managing Director of KAA, Alex Gitari was KAA’s General Manager for Finance.

Alex Gitari took over the helm of the KAA as recovery of the aviation sector began to take momentum.  Since he took over, Alex Gitari has continued to drive growth by embracing new innovations, creativity that is delivering key infrastructure projects and further ensure that JKIA remains positioned as the preferred hub in Africa.

The airline industry is an important contributor towards economic development. It not only supports thousands of highly skilled jobs, but also facilitates international trade and tourism. The International Air Transport Association (IATA), the global trade association for the airline industry, estimates that aviation accounts for 4.6 per cent of Kenya’s GDP and supports 410,000 jobs. The industry, however, requires sustained investments in infrastructure and other support services to thrive, bringing the role of the Kenya Airports Authority (KAA) into sharp focus.

Jomo Kenyatta International Airport (JKIA) is unquestionably the crown jewel of Kenya’s aviation industry, serving as an important hub for passengers connecting to Europe, the U.S., and the Middle East as well as the region’s leading cargo hub. KAA has over the past decade invested billions in overhauling operations at the airport, improving safety standards and bringing world-class customer service at the facility.

KAA’s most recent initiative at JKIA involves a 12-month renovation of the facility, which started in January 2021. The Sh936 million renovation program aims to refurbish the departure halls at the two terminals (Terminal 1B and 1C), improve check-in activity and enhance passenger lounge experience for customers using the airport.

“Once completed, the newly renovated light-filled departure terminals will deliver modern concessions and amenities that will give travelers a friendly and memorable experience. It will also ease passenger flow and increase efficiency due to the centralization of security screening procedures and the reallocation of available floor spaces to international departure gates,” said KAA in a statement.

This refurbishment builds on previous initiatives aimed at improving the international profile of JKIA, including getting clearance for direct flights between Kenya and the U.S. – an achievement that took close to a decade of sustained efforts to attain.

JKIA met all international safety standards in 2017, gaining the Category 1 status needed to provide direct flights to the United States. As part of the project, a modern terminal separating arriving and departing passengers was constructed. This has not only improved security, but also improved the capacity of JKIA. Today, the airport can handle up to 7.5 million passengers annually, up threefold from 2.5 million before the expansion.

The transformative initiatives at JKIA have not gone unnoticed. The airport has bagged several prestigious international accolades through the years, underlining the culture of excellence that KAA is promoting in Kenya’s aviation sector. In 2018, JKIA was recognized by Airport Council International (ACI) as the Best Improved Airport in the African Continent in customer service. The Council also awarded JKIA the 2020 Best Airport by Size and Region in the 5 -15 million passengers per year in Africa.

KAA has also embarked on ambitious renovations for Mombasa International Airport (MIA) and Kisumu International Airport. The renovation of the Mombasa facility, which is the second busiest in Kenya after JKIA, started in November 2018 at a cost of Sh7 billion and was funded by KAA and the French Development Agency. The works include the rehabilitation of the Airside Pavements and the Airfield Ground Lighting System at the facility. The rehabilitation of the airside pavements last took place in 1994. The new works is expected to add at least 20 years to the lifespan of the pavement

Of note, Mombasa International Airport won the 2020 Best Airport by Size and Region under 2 million passengers per year in Africa in ACI’s Airport Service Quality (ASQ) Survey, highlighting the excellence that KAA has been able to bring to MIA following the renovation.

Kisumu has also not been left behind. KAA last year announced the planned upgrade of Kisumu International Airport to improve customer experience and reposition the facility as a regional aviation hub. The Sh1.2 billion upgrade will see the passenger tower building expanded to handle one million passengers per year up from the current 500,000. The upgrade is expected to enhance the profile of the airport which serves the entire western region to attract direct international flights.

The expansion, which is set to be completed by April 2022 ahead of the Afri-Cities Conference in the lakeside city, is expected to attract many international airlines. Ethiopian Airlines and Qatar Airways have already expressed interest in flying direct to Kisumu International Airport.

KAA’s investments in Kenya’s airports comes at a time when international travel is picking up following the disruption by the Covid-19 Pandemic. Kenya is therefore well positioned to benefit from pent up demand for travel and tourism, given the country ranks among the leading tourism destinations in Africa.

In development banking, Alex Gitari interfaced with various policy makers in the Eastern and Southern Africa region, building an extensive network of contacts within the international financial circles, as part of his resource mobilization responsibilities. His employer all this time was the PTA Bank, where he served as the director of finance, after an earlier stint with Price Waterhouse Coopers in management consulting.